From AcaDec Scores and Information Center
Jump to navigationJump to search

Currently, the team is coached by Julie Tipton, who joined the team in Fall 2006.

Flower Mound's Academic Decathlon team was formed in Fall 2001 and initially coached by Jessica Ames, an AP Chemistry teacher, and Rose Mary Harvey. Both coaches established the school's competitive nature. When Mrs. Ames prepared to leave to care for her family, Judy Kemler was asked to coach the team by Flower Mound Principal Norman Reuther. He hoped the school could emulate Marcus High School's string of successes (4th at State in 1999, as well as Region XI wins in 2000 and 2001). Under the experienced guidance of Mrs. Kemler and Mrs. Harvey, the school improved steadily.

The school's second Academic Decathlon head coach, Judith Kemler, is best known for her role in coaching the 1996 J. Frank Dobie High School team, which won the school its second National Championship. She joined J. Frank Dobie's Academic Decathlon team, helping the team win District and Regionals and place second in the State in 1995. Her next and last year at J. Frank Dobie, she and Richard Golenko coached the team all the way to Nationals, which they won.

In Fall 2006, Julie Tipton took over the Assistant Coach position left vacant when Mrs. Harvey left the team. Through the continued efforts of Ames, Kemler, Harvey, and Tipton, the school's team went from obscurity in its Region to annual State meet mention, if not respect as a strong competitor.

After the retirement of Judith Kemler, Julie Tipton took over the position of Head Coach. She has fielded many assistant subject coaches during her tenure.

FMHS is in Region IX, considered by some to be one of the most competitive regions in Texas; notable top teams from this region include Copell, Nimitz, and Marcus. In addition, Region IX has sent at least 5 teams to State on all but 2 years since 2003.

Flower Mound High School's Academic Decathlon team was formed in Fall 2001, soon gaining prominence and increasing in score every year from 2004 to 2008.

The 2007 team, in the school's sixth year of competition, was the first from the school to reach State; 2008 saw a repetition of this accomplishment. 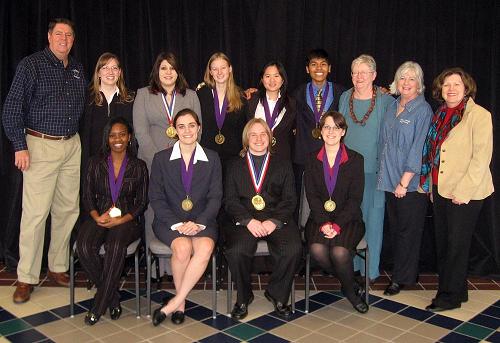 The first FMHS AD team to advance to State

Despite the Regional scoring conflict (Region IX placed history teachers in charge of grading the Essay event rather than the usual English teachers, resulting in significantly altered scores for some Decathletes), the Flower Mound High School Academic Decathlon team placed 4th in Super Quiz and 3rd overall. The team made its first state appearance in 2007, ranked 26th entering the State competition with 38,163 points. At the State competition, FMHS improved the most both in terms of score and rank, improving 3,125 points to place 10th with 41,288 points.

Attempting to once again advance to State, Flower Mound began its 2008 season late. When USAD notified FMHS that the school's order form and payment had been lost, the team quickly re-sent both, but received its materials over one month later, after school had already dismissed and it was difficult to contact students and hand out materials. Despite the initial materials difficulties, the school achieved an all-time team high score at Region, scoring 42,941 points and once again 4th in Super Quiz and 3rd overall. In addition, Honors student Jonathan Angel broke the team's individual high score, scoring 8119.3 points and placing second at the competition.

Entering State, Flower Mound was ranked 12th, behind both Marcus (7th) and Nimitz (2nd) of Region IX. Though subjective scores affected nearly every team, Flower Mound managed to garner three medals, one in each subjective event, as well as one in Mathematics. In the Super Quiz Relay, Flower Mound placed 4th, missing medals by a single question. Overall, the team improved its standing to 11th and Honors student Ju Ri Hur once again broke the team's individual high score with 8191.4 points.

During this period, Flower Mound High School performed among the middle of the pack, both in the LISD district and in Region IX of Texas. They qualified for State competiton on all but 2 years within this period. The school hosted several scrimmage and district competitions during this time. Not much else is known during this period.

Tipton continued her run as head coach into the 2017 season, with Anda Lee Seat, Wendy Massey, Brian Dalak, and Lori Hautt as subject coaches. Fielding an incomplete team with only one varsity decathlete, the school failed to qualify for state in the 2017 season, with a Regional score of 30,700.1 points, scoring 9th in Region IX.

After a major enrollment push, the school entered the 2018 season with a much larger class. The team was significantly younger than in seasons past, including 4 sophomores. The team bounced back from it's relatively low score in the year prior in Regionals with 40,638.8 points in the competition, scoring 6th place with 8 medals. In state, the team scored 29th overall, with 3 gold medals, including 2 perfect scores.

Enrollement continued to increase into the 2019 season, up to a record 51 students. Multiple cuts to the class were made into the early season. In addition, after a major internal shift, the class was left with only one returning assistant coach, Seat, with just one new coach, Allie Schmaltz, in place of the three assistant coaches who had left the team. In Regionals, the team scored 6th with a 41,881.8, returning to State for the second straight year. In addition, Chukwusom Uzowihe broke the school individual score record with a 8,734.8. At State, the school scored 22nd, improving their score to 43,197.5. Chukwusom Uzowihe once again broke the school record with a 9,136.4.

Bold indicates a record score or rank at that level of competition.